After a couple of rest and preparation days on Quadra Island, our partners joined us for leg 2.  After eleven days and some 120 nautical miles later – brought us to Port McNeill on northern Vancouver Island. Find out about our highlights below! 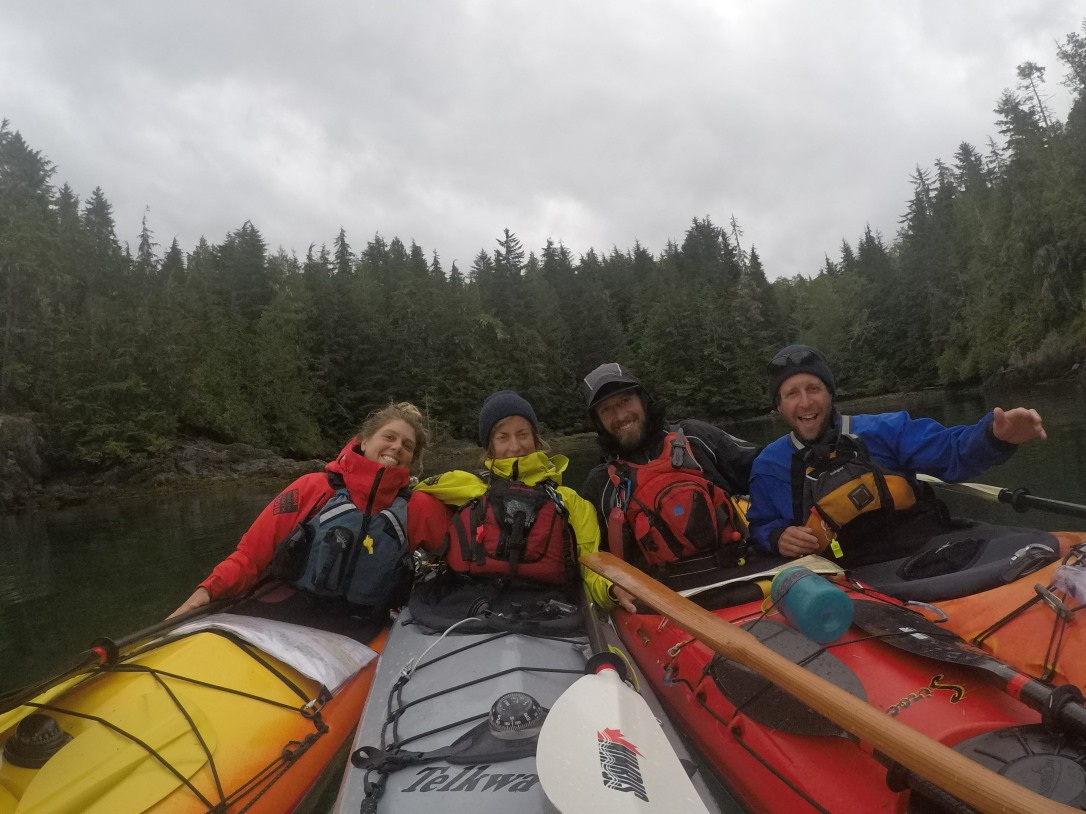 On our way through the Discovery Islands up into Johnstone Strait, we had to paddle through a few rapids: Surge Narrows, Upper and Lower Rapids, Okisollo Channel and Whirlpool Rapids. By calculating the slack time for these currents ahead of time, we made it safely through these narrow waterways. Working together as a team, we gained a better understanding of eddies, currents and how large water bodies of water move through passages. 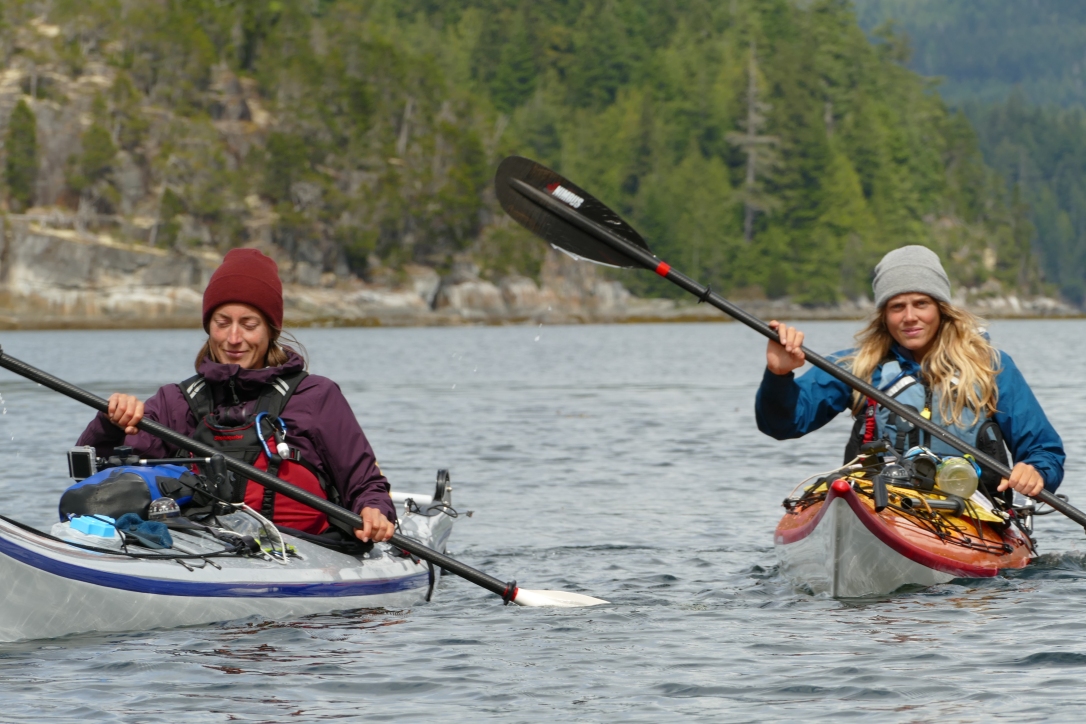 After we had made our way up into Johnstone Strait, we learned – thanks to the marine weather forecast – that high winds were expected for Queen Charlotte Strait, an exposed open body of water that is ultimately influencing Johnstone Strait. When we were attempting to cross over from Midsummer Island up towards Retreat Passage, 25 + knot winds and gust forced us to turn around and seek shelter early on in the day. As a result, we couldn’t visit the Salmon Coast Field Station in Echo Bay, one of our designated spots for an interview.

Hooray, we saw lots of wildlife during this leg! We had our most magical moments in Blackfish Sound and on Flower island, as we were able to watch humpback whales both from the shore and the water. Among those acrobatic giants were a mother and a calf, that we spotted early in the morning. We were fortunate to observe several groups of Dall’s porpoise, pods of white-sided dolphins, seals and sea lions. Black dots on shore turned out to be black bears – we saw two animals munching on sedge and grass near the shoreline.

Throughout the eleven days of paddling we hardly encountered any people, were completely out of cell phone service and mainly camped in unestablished sites on beaches (leave no trace policy). Being disconnected from the outside world felt remarkably good and our senses quickly adjusted to our new surroundings. 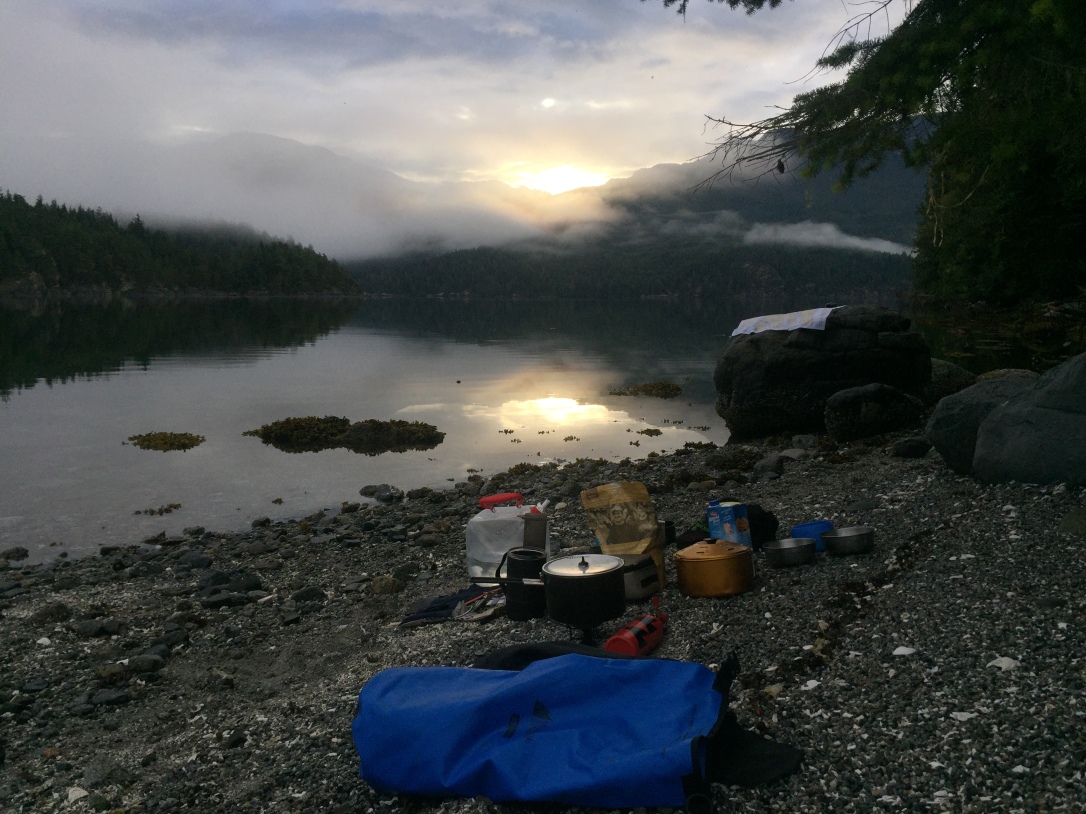 Leg 3 will bring us all the way up into the Great Bear Rainforest, after crossing Queen Charlotte Strait and passing Cape Caution. The longer we are out on this expedition, the less we can wait to get further north to learn more about this fascinating coast.

View all posts by PaddlingNorth